DEWS started its operations in 2001 after the Ministry of Scientific Research and University awarded grants for the formation of centers of excellence on a competitive basis. DEWS was among the very first organizations that proposed research on the use of networks of sensors, controllers and actuators to solve society scale problems such as health, disaster recovery, transportation systems, and education. Its mission is still very up-to-date as the EU intends to focus the FP VIII on societal problems.

DEWS has established strong research collaborations with some of the most prestigious universities in the world such as University of California at Berkeley, University of California at Los Angeles, University of Pennsylvania, Berkeley Wireless Research Center (BWRC), Berkeley Center for Hybrid and Embedded Software Systems (CHESS), Royal Institute of Technology (KTH) in Stockholm, and Cambridge University. Furthermore, DEWS signed at its inception a formal cooperation agreement with the University of California at Berkeley, involving the mutual exchange of researchers and students working on joint projects. DEWS has an ongoing collaboration with multinational companies such as Selex Communications (Chieti, Florence, Genoa, Pomezia), Thales Communications (Chieti), and Ford (Aachen, Germany). In this context, the Centre has been able to plan and manage projects of significant complexity as well as to spin-off an engineering company  (WEST AQUILA).

DEWS was a member of the HYCON Network of Excellence (Hybrid control: taming heterogeneity and complexity of networked embedded systems). It is currently a member of the Network of Excellence HYCON2 (Highly-complex and networked control systems). The aim of these Networks of Excellence is to assemble a community of high-profile researchers involved in the broad area of hybrid system analysis and design with particular emphasis on distributed complex systems and industrial applications.

DEWS has created DEWSLab, a laboratory for the design and implementation of wireless sensor networks using products developed by Crossbow, a company headquartered in California. The lab has been configured as a "testbed" for innovative solutions related to routing and coding algorithms and it is used as a web service to allow remote access to interested parties. Within the Network of Excellence HYCON, DEWS has been chosen as the node of the European Embedded Control Institute for the realization of the European Networked Control Systems Laboratory (NCSlab). 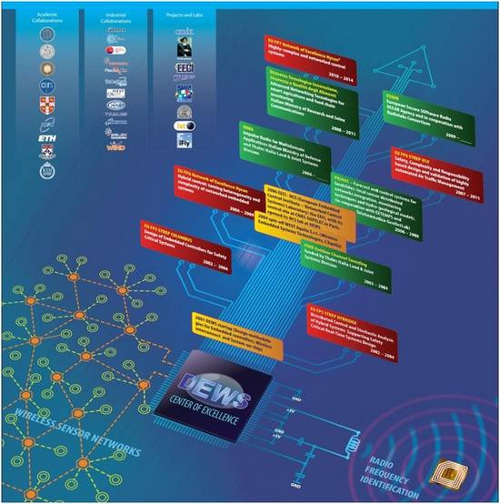